Croatia face must-win final Group D game against Scotland after they could only draw against the Czech Republic in Glasgow.

Ivan Perisic rescued a 1-1 draw for Croatia after Patrik Schick became the leading scorer in Euro 2020 with a controversial penalty.

Schick scored a decisive double, including a stunning long-range strike, in Czech Republic's opening 2-0 Group D win over Scotland at Hampden Park and put his side in front from the spot at the same venue.

Croatia were understandably aggrieved that Dejan Lovren was penalised for seemingly accidentally catching Schick on the nose with his elbow after the VAR asked Carlos del Cerro Grande to check the pitchside monitor in the first half.

Perisic levelled early in the second period, leaving Croatia three points behind Czech Republic and two adrift of England – who play Scotland later on Friday – with one game to play against Steve Clarke's side 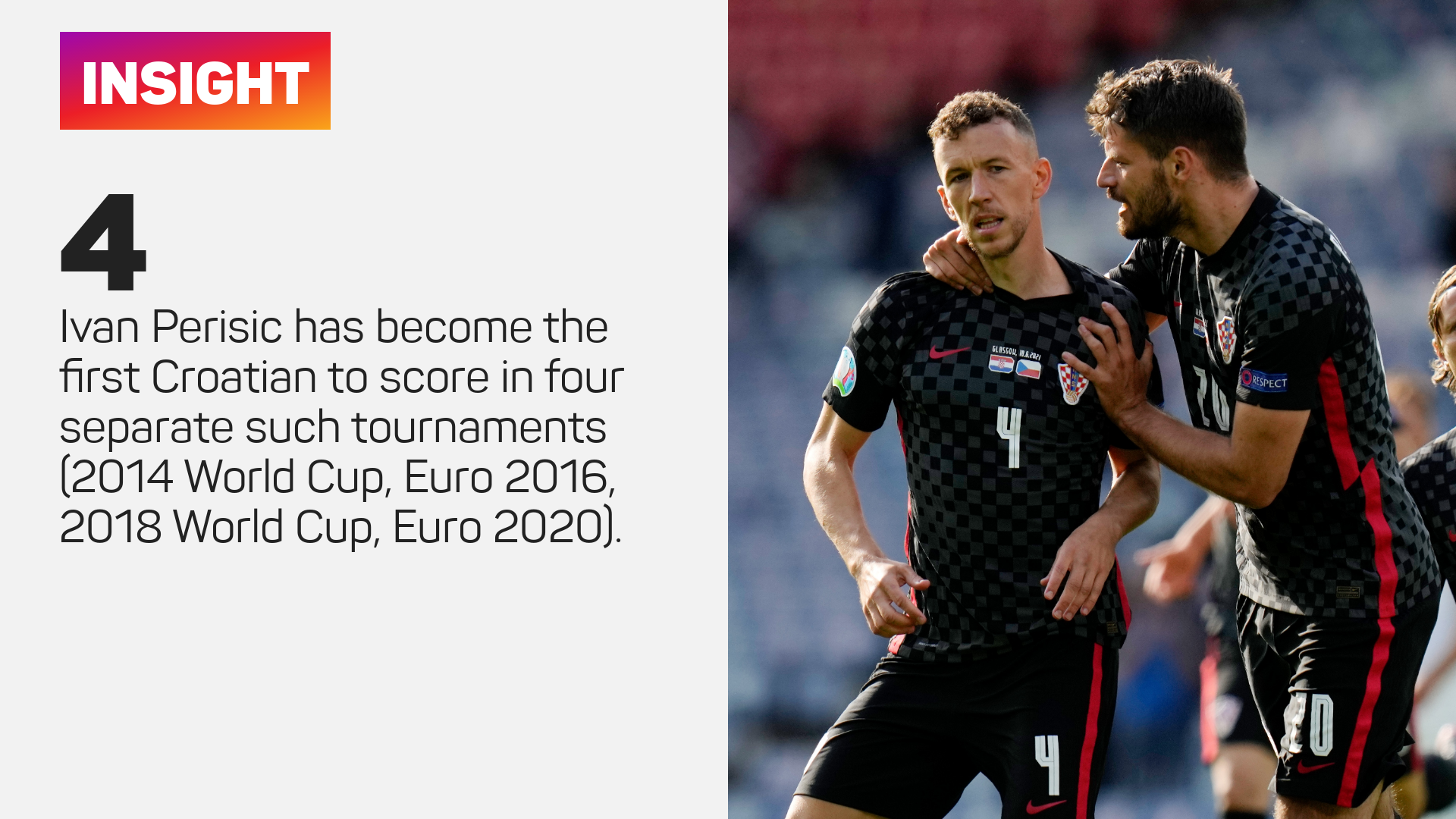 A drab first half came to life when Spanish official Del Cerro contentiously pointed to the spot, leaving Lovren stunned as there did not appear to be any intent when he caught Schick as they jumped for a header from a corner.

In-form striker Schick was left with blood streaming from his nose but picked himself up to send Dominik Livakovic the wrong way with the Czech Republic's first shot on target eight minutes before half-time.

Ante Rebic wasted a glorious chance to equalise a couple of minutes later, blazing wide of the near post from inside the penalty area after being played in by Josip Brekalo.

Croatia boss Zlatko Dalic made a double change at the break, replacing Brekalo and Rebic with Luka Ivanusec and Bruno Petkovic

The 2018 World Cup runners-up were level two minutes into the second half, Perisic cutting in from the left before drilling a powerful strike beyond Tomas Vaclik with his right foot.

Both sides showed more urgency after the break and Tomas Soucek let fly with a long-range drive that flashed past the far post.

Schick rose highest to meet a corner from the left but headed over the crossbar and Nikola Vlasic missed a great opportunity at the other end, firing over from 12 yards out.

A late Petkovic shot deflected wide after he turned sharply in the area, but neither side had the quality to conjure up a winner and the pressure is on Croatia going into their battle with Scotland.

Pandelela Rinong bounced back from her disappointing preliminary round to reach the women's 10m platform final at the 2020 Olympic Games on Thursday.

Chelsea are reportedly set to table a fresh bumper offer for Inter's Romelu Lukaku but manager Thomas Tuchel would not discuss any bid.

Victor Oladipo will remain with the Miami Heat and target free agency in 2022 as he regains full fitness after quad surgery in May.

Nuno yet to discuss transfer controversy with absent Kane

Harry Kane and Nuno Espirito Santo have not yet had the chance to speak, according to the new Tottenham manager.

Tokyo Olympics: What to look out for on Thursday

The USA have teams in the medal hunt across football, baseball and basketball on Thursday, when there is a mouth-watering 400 metres final.

Fofana carried off on stretcher in Leicester's pre-season friendly

Leicester City suffered a pre-season setback as Wesley Fofana was forced off on a stretcher against Villarreal on Wednesday.

Chelsea threw away a two-goal advantage in pre-season to share the spoils with London rivals Tottenham at Stamford Bridge.