Australian Open: 'It's fun, it's brilliant' – Barty ready for Collins date with destiny

Ash Barty will be a firm favourite in Saturday's Australian Open final, but there is cricket to watch before then for the level-headed star.

Ash Barty is ready for "one last crack" on Saturday when she will bid to become a first home winner of the Australian Open women's singles in over 40 years.

The 25-year-old Queenslander powered through to the third grand slam final of her career with a clinical 6-1 6-3 win over Madison Keys on Thursday.

She is 2-0 for her past two finals in the majors, taking titles at the 2019 French Open and last year at Wimbledon, and has looked an unstoppable force in Melbourne.

That theory will be put to the test by Danielle Collins, the 28-year-old big-hitting American who dismantled Iga Swiatek's game in the second semi-final to reach a first slam final.

Barty is dialled in and up for the challenge, looking to land the title that was last won by an Australian when Chris O'Neil triumphed at the 1978 tournament.

"It's fun, it's brilliant to be playing in the business end of your home slam," Barty said in a news conference.

"Saturday's going to be a new experience for me. So I'll go out there and embrace it, smile, try and do the best that I can, and whatever happens, happens.

"It's been an incredible January and incredible summer for us, and I'm really looking forward to having one last crack here, to really go out and enjoy it."

Wendy Turnbull was the last Australian finalist in the women's singles, way back in 1980, and the scale of the achievement in ending the long wait is not lost on Barty, who has already won doubles and singles titles this month at the Adelaide International.

"To be in the finals weekend of your home grand slam is what a lot of Aussie players dream of," she added.

This is modesty, but Barty is now a long-standing world number one, and therefore anything but lifting the trophy would be a disappointment at this stage, with 27th seed Collins looking to spring what would be a major upset.

Barty said she was able to "play the match on our terms" against Keys, pointing to her on-court effort being a collaboration with her support team. 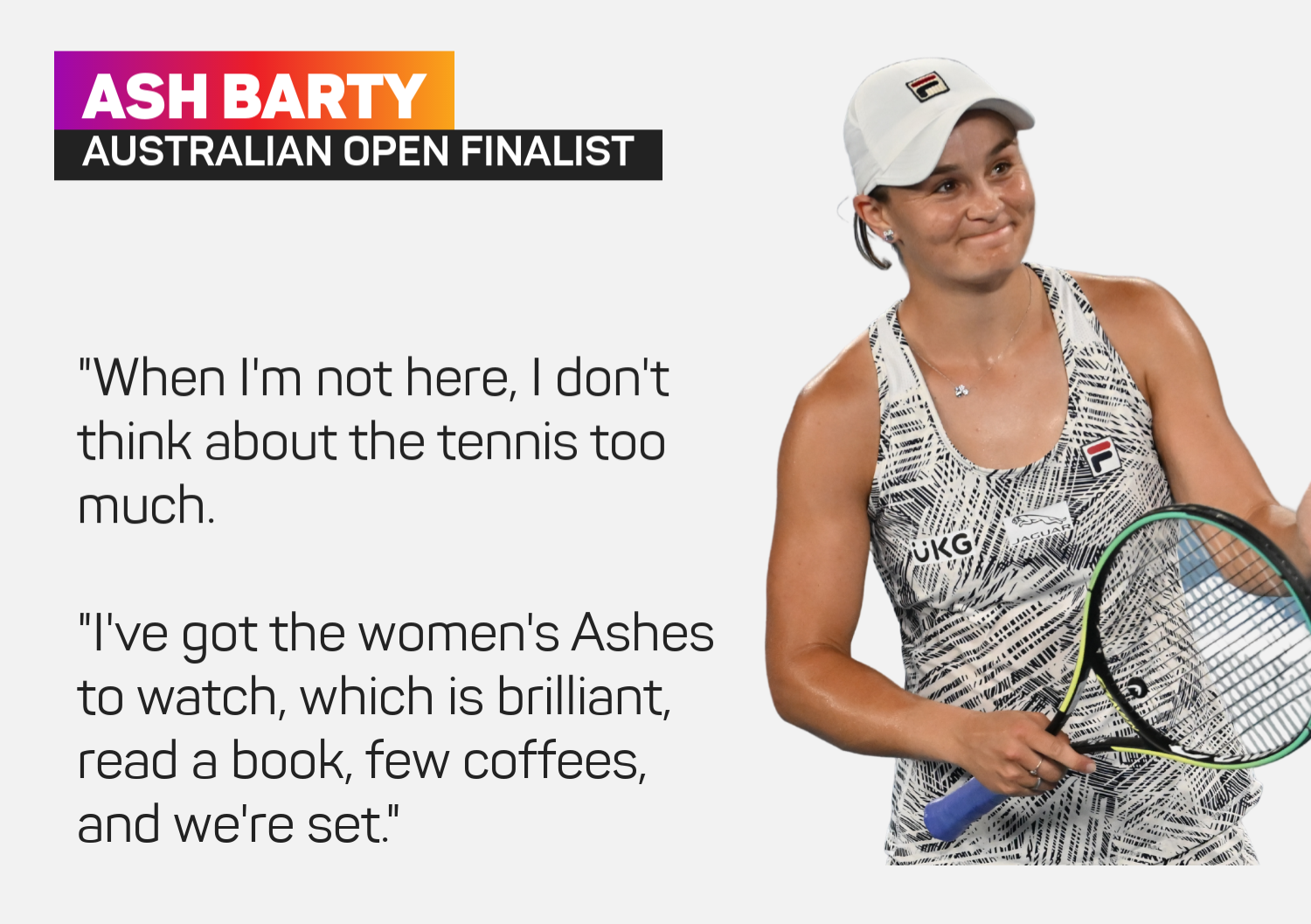 Keys was outplayed and her reflection on the experience of tackling Barty was blunt.

"It's tough, it sucks. She's just playing incredibly well," Keys said. "You have a game plan in your head, but she's just executing everything so well.

"She's serving incredibly well, so you don't get any free points on that; her slice is coming in so much lower and deeper than it was in the past, so it's hard to do anything on that; and then you try to play to her forehand and she can open you up there.

"She's so locked in and focused. I've played her a handful of times and this is easily the best I think she's ever been playing."

Barty, who dabbled with cricket before focusing on tennis, appears to have a work-life balance that would be the envy of many, finding it no problem to unwind once she leaves the gates of Melbourne Park. Enjoying the early Australian dominance in the women's Ashes has only brightened her mood.

"It's pretty easy for me. When I'm not here, I don't think about the tennis too much," she said. "I've got the women's Ashes to watch, which is brilliant, read a book, few coffees, and we're set."

The young Barty who first visited the Australian Open before hitting her teenage years, for a training camp, would stand in awe of the player she has become.

"I'd have been only 11 or 12 years old," she recalled. "To see how professional it was and to see everybody going about their business was really eye-opening.

"My first taste of it was in the juniors and I loved it. Being able to get a taste of that kind of lit the flame. You wonder what you can achieve."